Rotarians are your neighbors, your community leaders and some of the world’s greatest history-makers:

Ready to make history with us? Get involved. 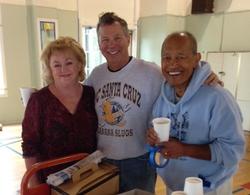 Step into our world of service and uncork what Rotary is all about and what benefits are involved in being part of this worldwide organization.  Discover how you can impact change in the local and global community with today's leading business and civic leaders in Monterey. Rotary provides the gateway to connect with people, a worldwide network of 1.2 million business and community leaders, a cross-section of professionals who come from all different walks of life, but share the same beliefs; that service to others, high ethical standards and friendship are the basis of a fulfilling life 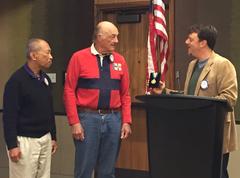 Rotarians have not only been present for major events in history—we’ve been a part of them. From the beginning, three key traits have remained strong throughout Rotary:

We’re truly international. Only 16 years after being founded, Rotary had clubs on six continents. Today we’re working together from around the globe both digitally and in-person to solve some of our world’s most challenging problems.

We persevere in tough times. During WWII, Rotary clubs in Germany, Austria, Italy, Spain, and Japan were forced to disband. Despite the risks, many continued to meet informally and following the war’s end, Rotary members joined together to rebuild their clubs and their countries.

Our commitment to service is ongoing. We began our fight against polio in 1979 with a project to immunize 6 million children in the Philippines. By 2012, only three countries remain polio-endemic—down from 125 in 1988